Here in the UK, the Labour Party has, almost by accident, just voted in the most overtly and unashamedly socialist leader since Michael Foot over 30 years ago. As such, 66-year old Jeremy Corbyn, has already managed to upset many people by not singing the National Anthem at a service in St Paul’s Cathedral to mark the 75th anniversary of the end of the Battle of Britain. So, Jeremy Corbyn may have a lot to learn (very quickly) about being Leader of a political party; and it will be interesting to see whether he can hold such office and stay true to the anti-establishment character that defines him. As such, Jeremy Corbyn is the latest in a long line of people within the Labour Party who often managed to make controversial ideas sound entirely reasonable. In recent decades, those that come to mind include Michael Foot, Tony Benn, Tam Dalyell, George Galloway, and Dennis Skinner. Furthermore, as became clear during the leadership contest, Jeremy Corbyn accepts the reality of anthropogenic climate disruption (ACD); and the need to take action to mitigate it and/or adapt to it. As do Paul and Anne Ehrlich:

Many complexities plague the estimation of the precise threats of anthropogenic climate disruption, ranging from heat deaths and spread of tropical diseases to sea-level rise, crop failures and violent storms. One key to avoiding a global collapse, and thus an area requiring great effort and caution is avoiding climate-related mass famines. (Proc. Royal Soc. B, 280: 1754) 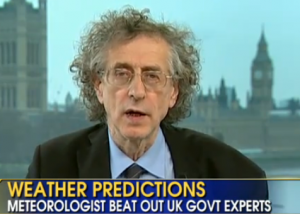 I must admit I had not really paid any attention to Jeremy Corbyn before. However, I cannot say the same of his brother, Piers Corbyn – who came to my attention while doing my MA in Environmental Politics: According to Wikipedia, Piers Corbyn is an astrophysicist with a life-long interest in meteorology. He is also the founder of WeatherAction and was the main organiser of Climate Fools Day in the Houses of Parliament on 27 October 2010 (to mark the 2nd anniversary of the passage into law of the Climate Change Act 2008). As such, it is very clear that the views of Jeremy and Piers Corbyn – as to the primary cause of climate change – could not be more different. The purpose of this blog is not – nor has it ever been – to defend the validity of the scientific consensus (that ACD is an imminent threat to a large proportion of life on Earth). I will leave that to the IPCC (WG2) and websites such as SkepticalScience. However, I would like to highlight the absurdity of the position adopted by Piers Corbyn… In 2008, the flyer for the Climate Fools Day event highlighted a supposed necessity for “evidence-based science and policy” rather than the “Carbon Con”. It went on to suggest:

If the UK had been relying on wind farms there would have been bAltmanouts all over, freeze-ups, more burst-pipes & cold-weather deaths. This is the madness CO2-Global Warmist religion is leading Britain towards.

As such, anthropogenic global warming (AGW) is presented as a myth; not based on evidence, and pursued by politicians who have been duped by the proponents of a new religion. On his website, Piers Corbyn also describes AGW as a “failing theory” and “scientific fraud” (because it supposedly stopped in 1998); maintains it was warmer 1000 years ago; and has made it clear he believes our Sun is the most likely cause of the climatic changes we see (2008). However, more recently, he has gone much further than this; to claim that: • solar activity (total radiance, sun-spots, coronal mass ejections, and/or solar flares) are causing more earthquakes and volcanic eruptions; • people who believe in AGW are as deluded as Colonel Gaddafi; CO2 has no effect on weather or climate (emphasis added); and that we are heading for a mini ice age by 2035; and • there is no evidence in thousands or millions of years of data that CO2 changes drive any changes in climate. If anyone is inclined to ask why this position is absurd, just think about the implications: Anyone who equates the scientific consensus regarding ACD/AGW with religious belief, collective hypnosis, hoax, fraud, myth, or whatever… is asserting that the vast majority of relevantly-qualified and active research scientists are simply wrong. As such, they are asserting that the majority are either stupid, sloppy, or suspicious. Such people often point to the example of Galileo overturning a consensus. However, Galileo overturned theological orthodoxy by weight of scientific evidence. Therefore, climate change ‘sceptics’ are not like Galileo; they are like the medieval Roman Catholic church. As such, they are not sceptics at all; they are blinded to the truth of science by libertarian ideology.

Possibly just another 'Climate Cassandra' crying 'Wolf' in cyberspace. However, the moral of the old children's story is that the Wolf eventually turned up!
View all posts by Rick Altman →
This entry was posted in Climate Science, Denial, Environment, IPCC, Pseudo science, Religion and tagged IPCC, Paul Ehrlich, Piers Corbyn, Weather Action. Bookmark the permalink.

4 Responses to Jeremy and Piers Corbyn – ‘Brothers at Odds’