Occam’s Razor works for me! 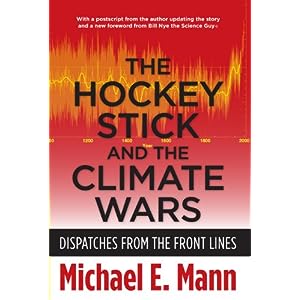 ‘The Hockey Stick and the Climate Wars: Dispatches From The Front Line’ by Dr Michael Mann, Professor of Meteorology at Pennsylvania State University, was recently published in paperback. I decided to purchase a copy. Here is my review of the book, as published on amazon.com. In the opening chapters of this book, Michael Mann repeatedly makes it clear that, as a physicist, his interest in palaeoclimatology was entirely natural. That is to say, he did not approach the evidence for climate change with any prejudicial notion of what he wanted to find, least of all to prove that ongoing climate change is predominantly human-caused. Those who are suspicious of Michael Mann’s motives will no doubt respond: “Well, he would say that, wouldn’t he! However, all readers of this book will, sooner or later, have to decide where they stand on the question of the validity of ‘Occam’s Razor’. This is the logical supposition that, among competing hypotheses, the hypothesis with the fewest assumptions should be selected. With regard to climate science, I have to say, it works for me: Either this book is an unashamed piece of propaganda and, from the very start, is deeply disingenuous; or it is the honest account of a very humble physicist who, completely unwittingly, became the focus of the biggest industry-funded misinformation campaign of modern times. Having read both this book and Andrew Montford’s ‘Hockey Stick Illusion’, I should like to propose that, even if you have not done so, you have the following choice: Do you put your trust in an authoritative argument from a genuine expert (Mann) or do you want to believe the conspiracy theory put forward by a non-expert (Montford)? Put it another way, are you going to believe that climate scientists are over-stating a problem in order to perpetuate the funding of their research; or are you willing to accept that business leaders are down-playing a problem in order to perpetuate the viability of their business? If you are undecided, the following facts may help you: (1) There is no significant precedent for research scientists over-stating environmental problems – nor any evidence (that has not been examined and found to be groundless) that climate scientists are doing this or have done this at any time in the last twenty years. (2) There is a very significant precedent for business leaders (in the tobacco industry) down-playing environmental problems – and a great deal of evidence that this is exactly what fossil fuel executives have been doing for at least the last 20 to 50 years. In the opening chapters of this book I was particularly impressed by the following argument (attributed to Stephen Schneider): We do not buy home insurance because we think our house may burn down. We buy it because that very unlikely event will be catastrophic… Applied to the issue of anthropogenic climate disruption, humanity’s continuing failure to take out insurance against an increasing probable catastrophic outcome does indeed seem “crazy”… Unless of course, you prefer to believe the ideologically prejudiced opinions of other genuine non-experts like Senator James Inhoffe, who would have us all believe that anthropogenic climate disruption (ACD) is a false alarm. If, after reading this book, you still think ACD is a false alarm, I suggest you cancel your fire insurance – you’re wasting your money – it’s never going to happen.

13 Responses to Occam’s Razor works for me!